Skip to content
This op-ed was originally published in the Wall Street Journal.
By Robbie Cohen

I am a 24-year-old, idealistic, socially liberal Manhattan resident who voted for John Kerry in 2004. I should have been part of Barack Obama’s base. Yet for the past four months, I worked my heart out — 15-hour days, seven days a week — for John McCain. 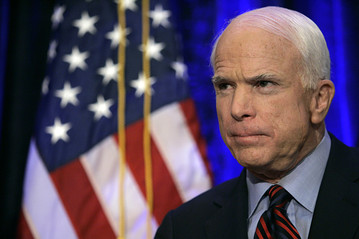 When asked why he wanted to be president, his answer was always: “I want to use the office to inspire a generation of Americans to serve a cause greater than themselves.” Sen. McCain, despite the outcome of the election, I want you to know that you’ve done just that.

Your service in Vietnam and Senate record is inspiring enough. But the honorable way you conducted your campaign is also a great inspiration, especially your decision to sponsor comprehensive immigration reform; the passion with which you escalated your campaign during the final weeks; and your decision not to discuss the Rev. Jeremiah Wright controversy.

When the 2008 campaign had barely begun, I watched nervously as you sponsored the McCain-Kennedy immigration bill. The abyss into which it threw your campaign was deep and predictable. But you revived your cause by standing up at town hall meetings across America and arguing your case.

The Republicans and independents who came to these events were reasoned, impassioned and sincere. And you had the guts to stand there and say, “I need your vote, I disagree with you, and here’s why . . . .”

When the Dow sank 2,000 points in early October and it seemed George W. Bush might cost you the presidency a second time, you escalated your campaign — more events, more ads, a more passionate stump speech, but not a drop of vitriol or bitterness.

Mr. Obama’s victory has been greeted around the world as a sign that America is indeed a land of opportunity. But the absence of racial animosity upon the election of the first nonwhite president was not inevitable. For all of Mr. Obama’s Teflon-like resilience, there was one line of attack McCain supporters knew would stick, because it had stuck in April — Rev. Wright.

Yet as I sat there in a staff meeting eight days before Nov. 4, anxious to know if this proven line of attack would be resurrected on behalf of my candidate, your campaign manager calmly said it was not an option in a way that made it clear whose decision it was.

You knew that the racially charged campaign that would evolve from Wright commercials would be so bitter, so ugly, so divisive that even if it were legitimate to question why your opponent’s spiritual mentor gave credence to the most egregious of racist lies, the benefits to your campaign would not outweigh the costs for the country. If you had run the ads that were being proposed, we might have closed the gap. But we would have opened wounds this country has spent decades trying to heal.

Instead, you were willing once again to risk your political future for the good of the country. This was your last chance to achieve the office you’ve sought for so long. Your restraint represents to me a once-in-a-generation political sacrifice — the essence of a man whose entire life stoically states “Country First.”

So for all the discussion of how the youth vote went for the Democrat, please know that there is a cadre of us who will forever know ourselves as Generation McCain.

We know that kids our age are alive because of the Iraq surge you championed when it wasn’t popular.

We have internalized that sticking by one’s principles produces an amazingly strong base from which to undertake any challenge.

We are inspired to fight for our causes not just because we watched you fight valiantly, but also because of the way you chose to fight. Your decision to campaign with grace and principled determination is something we will aspire to and remember forever.

Thank you, John McCain, for being our hero, and for giving us an example to live by.